I’m emboldened to optimism by Larcher and Team’s SVOD background, which by definition has – all the way from producing a film to distributing it – been about embracing technological possibilities, not clinging to the past.

All told, the Nordics region picked up 84,000 new subscribers for Storytel in 2022, to a total of 1.232 million, so barely above 50% of Storytel’s total reach. And 1.2 million may sound impressive until you remember Storytel Nordics crossed 1 million back in July 2021!

Not good news for Storytel, although the new CEO Johannes Larcher puts a brave face on things, as well he might given he’s not in any way responsible for the way Storytel Nordics growth ground to a halt these past eighteen months.

But what really matters is what happened elsewhere, and for that I’m going to mostly skip the numbers – check out Storytel’s press release for those details – to focus briefly on the bigger picture, which right now is sadly nowhere near as exciting as back when the Storytel headwinds first began to build.

– and for a while Storytel was rudderless and drifting aimlessly.

Six months on, and just three months into new management, Storytel has begun to re-establish itself as a player in the global audiobooks market, but the jury’s out on just how far Johannes Larcher can steer the good ship Storytel back into calm waters.

2022 has not been totally unkind to Storytel, with the unforeseeable loss of the Russia market offset by Tellander’s last major contribution to the company – the entrance into the US market – and of course we have to take into account the wilderness months when Tellander was forced to walk the plank and an interim CEO was left navigating by the stars.

The lack of meaningful subscriber growth in 2022 again has to be put in perspective. Because 2022 was not about expansion, but consolidation. The Tellander global growth map has been tossed overboard along with its architect, and now dollars (or rather, krona), not subscribers, dictated policy and were the measure of success or failure.

How much Larcher is fully in step with this is anyone’s guess. Obviously he knew the Board’s feeling he took on the job – they’d just shafted his predecessor for putting vision before short-term gain – but this is a guy with history in video streaming where subscriber growth, driven by international focus, had been king for a long time.

Of course, even the SVOD arena is now falling foul of myopic investor demands, as recession looms, belts tighten, and consumer spending power weakens. And in the short term we can expect no grand vision to be revealed by Larcher. But that doesn’t mean there isn’t one.

There’s no question New Normal for Storytel is a far cry from the Tellander-era Old Normal. Daring to make ambitious forecast and then beating them has been relegated to Storytel history.

But this is all about a post-Covid market correction, something Tellander was self-evidently not prepared for.

Yet Storytel has emerged from that storm battered, but essentially intact.

Which is why I remain optimistic about Storytel’s future as a global player, no matter that, for now, international expansion is not a priority.

Per TNPS back in August, as Larcher’s appointment was announced, I see a time when Storytel will again compete globally, though that’s unlikely to happen this year.

But per that August analysis, Larcher is not alone in the new management team in coming from a SVOD background, and my guess is that SVOD perspective will guide the shaping of the Larcher doctrine.

The Tellander doctrine was a pre-Covid model that, for now at least, cannot work, but I’m confident Larcher will have examined Storytel’s history and learned from Tellander’s hits as well as his misses.

That was back in 2020, and how the world has changed since. BookBeat has abandoned the unlimited model altogether –

but Storytel is now experimenting with a variety of alternative models.

And meantime Audible and Kobo are among those still pushing out the unlimited model.

But perhaps the defining challenge for Johannes Larcher will be Storytel’s position on AI-narrated audio as Apple launches its AI-narrated audiobook catalogue (and Spotify will surely not be far behind).

Will Larcher see and, with appropriate checks and balances, embrace the opportunity AI offers Storytel for a new global expansion programme that won’t disenchant investors, or will he resist the incoming tide?

Again I’m emboldened to optimism by Larcher and Team’s SVOD background, which by definition has – all the way from producing a film to distributing it – been about embracing technological possibilities, not clinging to the past.

As we see with the current kneejerk responses to AI’s assault on our collective industry complacency, clinging to the past tends to be publishing’s default mode. But the very existence of Storytel shows what’s possible when we step outside our comfort zones.

But let me end this item op-ed with a link to my thoughts on those who see AI as a threat to the industry.

Sweden’s most popular audiobooks on BookBeat, Nextory and Storytel 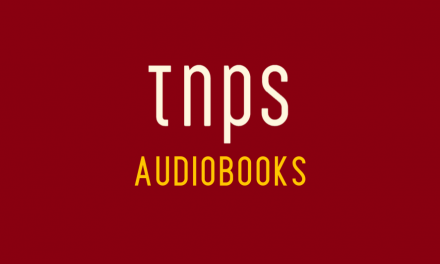