The Royal Palm Golf and Country Club in Lahore, Pakistan is probably not the kind of place you’d normally expect to see Harry Potter, Spiderman and Captain Jean-Luc Picard.

But then again, Pakistan is probably not a country we associate with comics and science fiction at all.

But things are changing, and Pakistan presents a fine example of the Global New Renaissance I often talk about here at TNPS.

The aforementioned Royal Palm Golf and Country Club hosted the 3rd Lahore Comic Con earlier this month. Turnout was only a few thousand fans, many in costumes, but then the Lahore event was a minor one compared to the TwinCon, a comic convention for fans in Islamabad and Rawalpindi, which had its fourth incarnation in 2017. 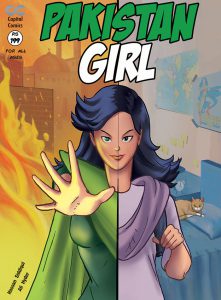 Created by Hassan Siddiqui, Pakistan Girl is the country’s first female superhero. No reports yet of Pakistan Girl appearing at the Lahore Comic Con this month, but Vice offered us some insights into the event, reporting,

It used to be that interest in comics was limited to old editions of Archie and MAD Magazine brought over by expat Americans and Brits. But now, fueled by the Marvel and DC movie universes, anime on cable TV, and local comic book artists looking to engage in the issues and vulnerabilities that affect young Pakistanis, the comic book scene in Pakistan is having a moment.

Founded by Ali Tariq in 2016, the store has an impressive array of genuine action figures from across the comics and sci-fi arena, imported from the USA, and is doing brisk business.

The kind of place you want to visit soon as that paycheck comes in. Possibly the coolest shop in Islamabad.

The Pakistan comic cons face competition from the Pakistan Anime Con, but at this stage in the game only The Comics Zone has a professional web presence, the others relying on Facebook pages.

One exception is CFX Comics, with a very impressive website, and which claims to be Pakistan’s premier comic publisher, offering titles in both English and Urdu, and providing Pakistan’s only self-publishing portal for comics.

Much more on the Pakistan comics scene soon here on TNPS as we continue our mission to track the Global New Renaissance as it happens, day by day.

Apple Services equivalent to a Fortune 100 company, but what about iBooks?