North America digital comics market worth upwards of $100 million in 2018. More when subscriptions factored in

It’s anyone’s guess what the value of the global comics market is, but for North America the best valuation we have for 2018 is $1.095 billion, of which at least $100 million came in from digital.

That’s according to ICv2, which reports the Kindle store leading sales for manga, and the second largest venue for digital comics sales after comiXology. 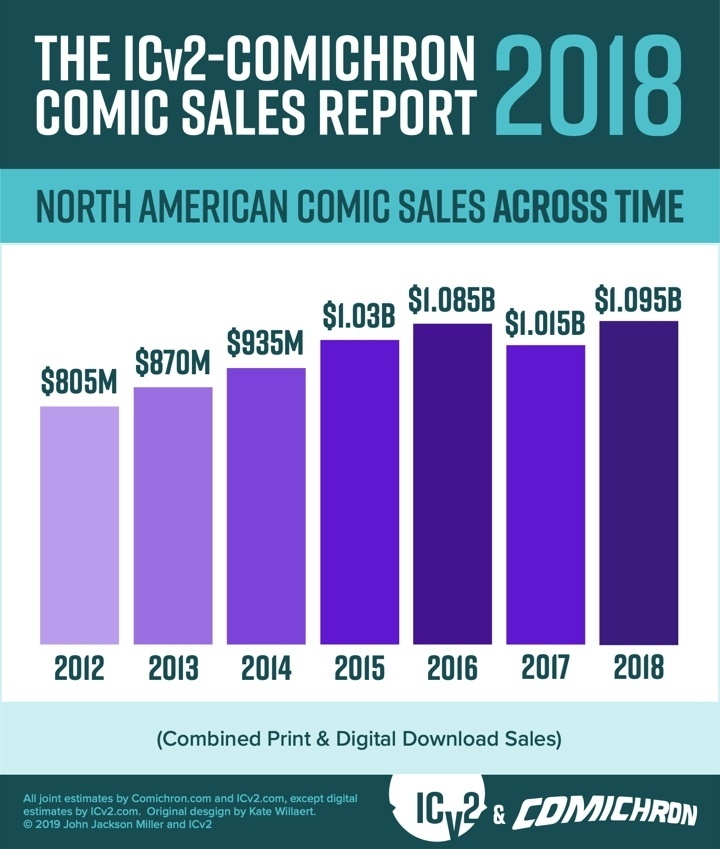 That makes Amazon far and away the largest seller of digital comics in the western world, since Amazon acquired comiXology in 2014. In third and fourth place come Google Play and I-Books

That’s still a tiny fraction of the overall comics market, still dominated by print. But as the ICv2 report notes, in Japan it is digital that is king of comics, with digital manga sales surpassing print last year.

The latest numbers suggest that’s a long way off for the North America market, but hold that thought.

The $100 million valuation is for Download To Own (DTO), and while we can be pedantic and wryly observe that we don’t actually own what we buy, the comics subscription market is growing fast.

Unfortunately there’s no available breakdown of how much revenue is being brought in through comiXology Unlimited, Kindle Unlimited and other services (ComicBlitz, Crunchyroll, Inkypen, etc), but what that means is that the $100 million will be erring on the low side.

It’s unclear whether the subscription-based services are cannibalizing download-to-own sales of older material, or if sales of older material would have dropped anyway as consumers getting used to digital comics filled out the backlist titles they wanted and started to focus more on new material.  Most seem to regard the growth of subscription-based sales as inevitable, citing the experience in music and video as parallels.  “You can’t put the toothpaste back in,” one publisher told us.

Looking at the bigger picture, overall sales of comics and graphic novels in North America reached a new high of $1.095 billion.