Those who follow the African literary scene (or indeed follow TNPS) will be delighted, but not surprised, to learn this news.

But many of us outside the continent or new to TNPS may be wondering what other literary surprises Africa has in store.

It’s a reminder that there’s a big, wide world of readers and writers out there beyond the borders of Amazonland, where most “indie authors” and far too many other publishers focus their energies, oblivious to the opportunities that abound in the wider world.

Like most languages on the planet, Swahili is not supported by the Kindle store.

In fact Amazon KDP and KDP Print supports just forty languages, and a close inspection of those languages reveals just how restricted Amazon’s global reach is when it comes to books and ebooks.

We all love the opportunity Amazon gives us in the handful of mature book markets it runs Kindle stores in, but don’t for one second think we are going to become global author brands if we choose to put all our eggs in the Amazon basket.

Here’s the “official” list of KDP-supported languages as we end 2018.

Chinese is also an option for some larger publishers, but not through the KDP portal.

The list looks impressive at first glance, but actually if we set aside Afrikaans, Arabic, Japanese and the Indian languages we are left with languages indigenous to western Europe, many of which  have speaker numbers in the low thousands (Northern Frisian 10,000 speakers, for example, or Manx which Wikipedia says has just 1,200 speakers). Reader numbers will be much lower,  and author numbers lower still.

It’s worth noting that Swahili speakers are concentrated in the D.R Congo, Tanzania, Uganda and Kenya, although spread much wider. In Kenya Swahili is one of the two official languages (the other English). Altogether we are looking at up to 150 million Swahili speakers who could be reading Swahili literature if it were readily available.

Of course the challenges of printing and distributing books across East Africa cannot be lightly dismissed. And we all know the internet hasn’t reached Africa yet, so there’s no point thinking about ebooks.

No, rewind that. What we think we know and cold reality are so often on different planets. Actually Africa is further down the internet road than you might think.

In fact, Africa has more people online that the USA. No, seriously. Try 312 million internet users in the US against the 453 million people online across Africa. And it’s only at 35.2% penetration.

Oh, and by the way that’s the end 2017 numbers. When we get the 2018 stats early next year we could easily be looking at a half billion Africans online.

But lets narrow the focus to just one of those Swahili-speaking countries, Kenya. This from a post on Kenya’s digital prospects in TNPS earlier this year.

That in itself is an impressive number, giving Kenya in 2010 as many internet users as New Zealand or Ireland have today.

And like many other African nations Kenya effectively by-passed the desktop dial-up and landline era and went from 4 million to over 40 million in just the past eight years.

Yes, Kenya started 2018 with over 43 million people using the internet.

That’s more internet users in Kenya than there are people in Canada.

That’s literally twice as many people online in Kenya as there are in Australia.

That’s more people online in Kenya than in Spain.

That’s four times as many people online in Kenya as in either Belgium, Sweden, Czech Republic, Hungary or Portugal.

That’s eight times as many internet users in Kenya as there are in either New Zealand, Bulgaria, Ireland or Denmark.

Okay, so we’ve clearly laid out the digital potential for Swahili authors and publishers, even if Amazon doesn’t want to play.

Now let’s get back to that Swahili Literary Festival next March. 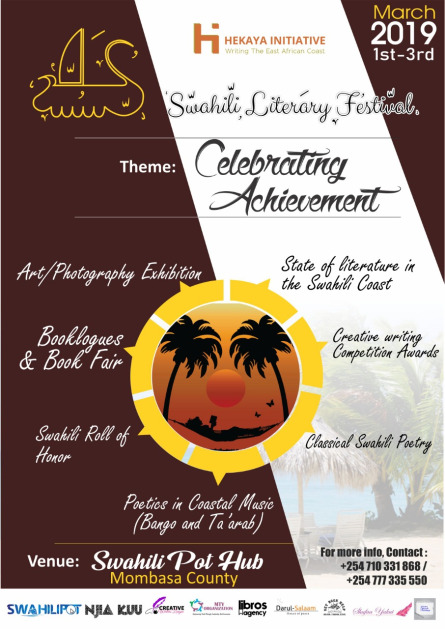 Here, via Africa In Words, is what’s on the agenda.

Seriously, what’s not to like? Even if, like me, you don’t speak a word of Swahili, this is what makes the global book markets so exciting as we countdown the final year of this decade and head into the 2020s.

This festival is just one of countless bookish events happening across Africa and around the globe that will pass largely unremarked by the western publishing media obsessing over Amazon’s latest move, but are what lie at the heart of the Global New Renaissance unfolding.

James Murua has more about the Swahili Literature Festival over at the James Murua Literature Blog, a must-read site for anyone interested in the African literature and publishing scene.

Azerbaijan’s 6th Baku International Book Fair kicked off today, to be succeeded by the 4th Eurasian Literary Festival of Festivals from September 30