While the books are being provided by Indonesia’s biggest publisher, Gramedia, the aim is to create wider interest in reading, and what better place to start than with commuters.

Raden Agus Dwinanto Budiaji, the passenger marketing VP at KAI, opened the event on Wednesday night. As well as books to buy there are numerous book-related family activities from colouring and short-story writing competitions to talk shows. 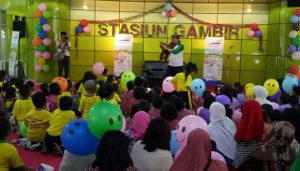 It’s not clear yet whether the Book Fair On Stations project will be extended, but this is one of countless initiatives in Indonesia to keep books and reading at the forefront of the public mind.

PT KAI may not have the infrastructure in place at this stage to offer ebooks at its stations and on trains, but given Indonesia is the fifth largest country in the world by internet users (143 million people online) that would be the logical next step for the state railway.

At this stage only Google Play of the Big 5 western ebook retailers has a dedicated Indonesia ebook store.

Storytel dots the ‘i’s with an Italy launch pending, having just opened in India