India’s Coimbatore Book Fair launches amid more nonsense about how social media and smartphones are killing the reading habit. It really is time publishers took the blinkers off

Summer is a quiet time in the Indian book fair scene, with the mega-events that attract millions of visitors tending to cluster around winter-spring, but there are some exceptions, and one is kicking off tomorrow, July 19.

Organised by the Coimbatore District Small Industries Association (CODISSIA) and the Booksellers and Publishers Association of South India (BAPASI), the event will run July 19 through July 28, with about 150 publishers present.

No estimate of visitors has been given, but sales are expected to be equivalent to around the half million dollar mark. 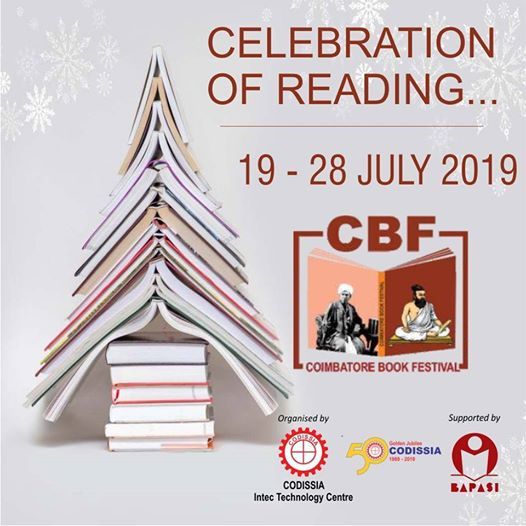 That’s great to hear, but the pre-paunch press conference was not all good news.

According to The Hindu,

R. Ramamurthy, president of Coimbatore District Small Industries Association, said the present generation must shift to the habit of reading, which had declined among today’s youth due to social media.

Head over to The Hindu for more details about the event itself.

Here to address a more pressing matter – the faux narrative that is hindering India’s development as a major international publishing nation.

Nor a problem in a bygone era when the only meaningful way to sell books was through bookstores.

But when the dynamic changes, and alternatives to bookstores appear on the horizon, an inevitable conflict of interest arises.

And so, instead of embracing a hybrid print and digital model that will give publishers the best of both worlds, benefitting consumers and society, we see publishers, egged on by booksellers who regard digital as a threat, doubling down on the status quo.

Of course it’s very easy to believe it if you keep repeating the same nonsense over and over and obstinately refuse to look at any evidence to the contrary.

And that’s the problem. Booksellers with a vested interest in bricks & mortar print distribution understandably prefer publishers do not know that digital library leader OverDrive has seen a 240% increase in reading when public digital libraries connect to school digital libraries.

Understandaby  booksellers would prefer publishers didn’t know that OverDrive was seeing 750,000 digital downloads a day in 2018 – over 274 million in all.

Understandably booksellers would prefer publishers didn’t know that the global reading platform Wattpad has over 70 million monthly users spending over 22 billion minutes a month reading on their smartphones.

I’ve just touched on digital libraries and Wattpad here, but as regular readers of TNPS will know, reading is on the increase pretty much everywhere, thanks to digital reading and listening options on smartphones. And of course that is all driven by social media.

To the extent that that is not happening in India, publishers have only themselves to blame. If publishers choose not to make content available in a format consumers want then it can hardly be surprising that consumers consume less and their attention wanders to other forms of entertainment provided by businesses that have moved with the times.

But of course it is happening in India, even is some stakeholders in the publishing industry insist on looking the other way.

Just this month came news that Penguin Random House India has teamed with Wattpad to deliver its content to the Wattpad platform.

I’ve just touched on digital libraries and Wattpad here, but as regular readers of TNPS will know, reading is on the increase pretty much everywhere, thanks to digital reading options on smartphones. And of course that is all driven by social media.

Let me end this piece with two more observations.

Indian publishers who are seeing fewer readers and are busily blaming digital might want to take a closer look.

The other point is that, with India at only 40% internet penetration it’s easy to fall for the idea that it’s too soon to start thinking about digital as there are so few Indians online.

In India today there are over 560 million people online. India is the second-largest country in the world by internet users, behind China but way ahead of the USA in third place.

Now consider that by 2025 the number of internet users in India is expected to reach 850 million.

As the audiobook industry “becomes more like the TV industry”, Storytel partners with Clipsource to boost discovery with a new Media Centre